AAAAARRRRGGGHHHHH. I JUST FOUND THIS POST FROM WAY BACK IN 2020 THAT WAS STUCK IN DRAFT AND NEVER ACTUALLY PUBLISHED HERE! WELL, TODAY YOU GET IT! (....and the reason I opened up my blog was because I was about to blog about some of my other stuff, including further work on this project....)

Hi all! Salem here from The Vampire's War Diaries. A Greater Daemon Challenge by the Scale Creep crew! Just the motivation I needed to get one of my old greater daemons painted up, some of which I had made a half-hearted start on back in the early 1990s, many of which were "re-collectings" from recent years to replace ones I had as a kid, and others still were just random purchases because I loved the models. So politely shoving my way in as a fake creeper, I signed myself up to the challenge. But how to choose? Which model will get the love this month? I think this calls for a ..... montage!

So now you have yourself a mass of beautiful plastic Warlords of Erehwon (/Wargames Factory) skeletons (see: the previous article), and you want to get them "tabletop ready" ASAP. Because, maybe, you have a tournament in a few days....eep!

Or, in fact, you have any brand nekkid skellies, or mostly nekkid. Here is how I get them buffed up quick and easy for the table. 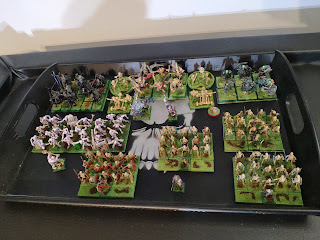 You may have seen a video from a well respected YouTuber who had a bit of an issue with the Warlords of Erehwon plastic skeletons. You bought the boxes, and then found that video, and are now sinking into a morass of despair. Worst models ever, I believe was the hyperbole on the video. He's a damn good terrain maker, but he is not the most patient of fellows.

Well fret not! I am here to save you. For yes, they are fiddly. But with a bit of strategy, planning ahead, and choosing the right tools, you can actually assemble them in a timely manner. Please read the whole thing before starting; it will be important! 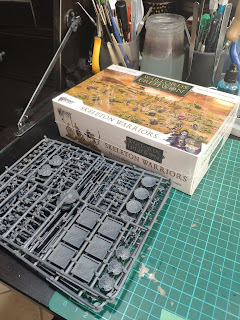 In the township of Angelfall the Book of the Grey is the bible and law book, encyclopaedia and instruction manual. The priests of the Grey are judges, police, spiritual leaders and guidance counsellors.

The Book describes the Greylands, the world just beyond death. While most religions focus on the afterlife, the Grey focuses on the transition world between life and death. Mortal souls travel across the Greylands as they make their way to the afterlife. It is from these Greylands that necromantic energy is drawn, and souls captured to become undead.

In Angelfall the townsfolk know of death and the Greylands, as all whole live there know the Book of the Grey from an early age. They also know of, but rarely speak of, the Keepers of the Dead.

.... and now for something completely different

So while waiting for Kings of War Third Edition to land, I was very hesitant to continue building, painting and modelling my undead army in case there were even more rebasing or unit change surprises in store. I was, however, being exposed to a mass of enthusiasm from an eclectic hobby collective for the new edition of Gaslands: Refuelled.

Email ThisBlogThis!Share to TwitterShare to FacebookShare to Pinterest
Labels: Painting and modelling

Unit Showcase - The Thing in the Woods (Lykanis)

Shadow Stalker heard the mournful howling echoing across the the hills. His keen eyes twitching at the sound, he turned his head to establish a direction. Over the castle walls, across the fen, and into the woods. The moon was sitting low and heavy on the dark horizon, nearly full and glowing with a pale iridescence. The perfect night for a run. 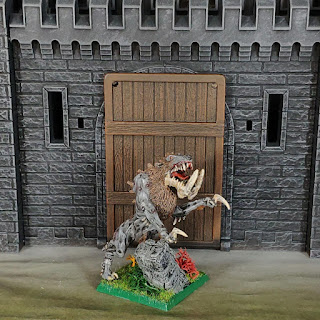 Part 1, the lead-up to this entry, can be found here.

Mantica was on the edge of the abyss. The surging of evil spewed forth untold horror upon the lands, and was defeated only through a mighty alliance of the neutral and good races. Channelling immense sorceries, a great thaw was thrust upon the world again, flooding the abyss and stemming the tide of evil. Balance was restored yet again.

There were repercussions from this, however, not immediately obvious at first. New lands not seen since the time before Winter's grip were now exposed, preserved through the ages by the unnatural magical cold. Far to the north and east of Mantica an undead outpost of the Ahmunites shook off the residual icicles, shuddering into motion again. The current southern Empire of Dust sent a fleet to meet up with their long lost brethren, while many other factions of Mantica raced up to colonise the newly surfaced fertile lands.

In the centre of this region a Kingdom of Men even defrosted, transported from another realm entirely, snap frozen in time, now rising up to conquer a new world - the men of Solland. 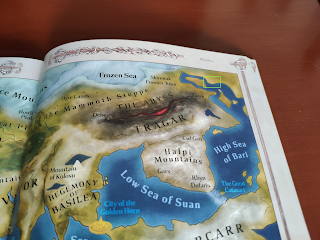 The peninsula at the top right in the little green box is where we imagined the campaign took place.

As a child in the late 80s into the early 90s I wanted what all cool kids wanted: world conquest. When Mighty Empires got released (the original cardboard tile edition) I jumped on the opportunity. I can not recall whether there was parental nagging or personal saving (via pocket money from parental nagging...), but I scored myself a copy of this great, huge boxed set with a million possibilities inside. My friends and I never really played a full campaign through with miniatures, as the time required meant it inevitably ended up getting packed away before it was done, although we did get a few games in playing it as a board game.

While not all of my miniatures made the trip from the past to the present, presumably being sucked into the warp of chaos or something along the way, my Mighty Empires boxed set did happily come through, and in quite good condition. And now that I had a regular gaming group (albeit for Kings of War, not Warhammer) the idea of playing a Kings of War campaign across a hexy world started to nag at the back of my mind. 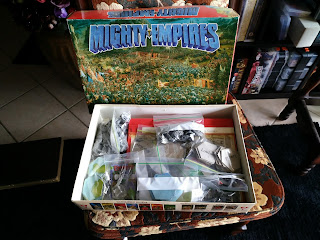 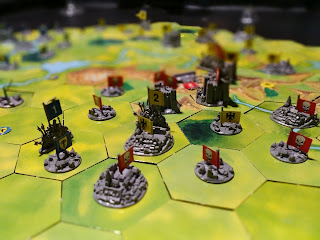 So you've seen those GW cases and you want something nice and solid to keep your army safe. But then you see the prices for new ones, and notice all the second hand ones have one clasp broken for some reason, and you think, "There's got to be a better way!". Well, there is!*

(* for some values of "better". There will be effort involved.) 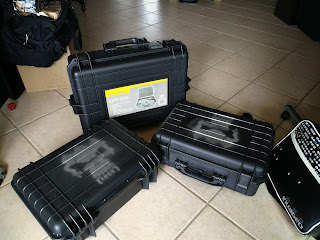 Kyteler the Tired was an old witch, of a line of old witches. But not the evil, cavorting with demons stereotype. Her mother had taken up residence in an abandoned woodsman's hut when Kyteler was just a babe, and raised her in isolation from the world around her.

She knew the forest she grew up in as the Black Heart Forest, and her mother taught her never to go too deep into it lest she become lost. The edges of the forest were safe, though, wrapped as she was in the charms and wards of her mother's craft. No spirit or devil in those parts were any match for her. 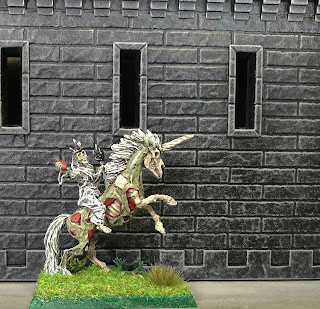 In life, Akran was a great student and even greater teacher. His keen intellect and voracious appetite for study had seen him accrue a wealth of information from all the various sub-schools of necromancy taught across the Ahmunite empire. Of course the assessment of his ability was his own, but his charisma and penchant for self promotion had others believing in his greatness. He was quite sought after for his special lecture series in the elitist of dark magic covens. For a fee, of course. Akran the Bright was the title spread across the flyers advertising his engagements, and he lived his life shining in the comforts that fame and wealth bring. Mannerisms and raiment he borrowed from the noble classes, and presented himself as a sort of pseudo pharaoh: regal and glowing. 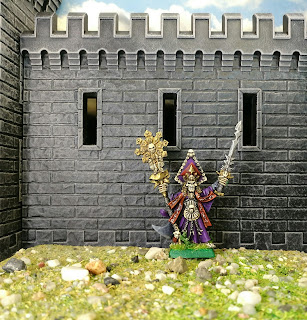 Whenever the topic of balance comes up in Facebook's Kings of War Fanatics group, the general consensus is that Kings of War is actually fairly well balanced. No one really claims it is perfectly balanced, and very few people claim that it is broken.

But what do people mean by this? Everyone probably has slightly different definitions, but for me a system is balanced when the power curve relative to the points costs is fairly consistent. That is, if you plot power against points, you will get the units clustered fairly close to a line. This line might be a straight line, or a curve, or a wiggle, but the units tend to stick fairly close to it.
Read more »
Posted by salem at 21:02 2 comments:

For 2016 I had set out to collect, assemble, and paint one of every unit entry listing for the Undead list in the Kings of War rulebook. Once that was done, I felt I was free to move on to refreshing my ancient Orc and Goblin collection for use in Kings of War, too. 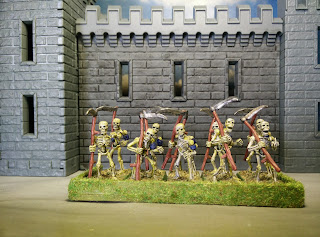 Korgaan's favoured sons ranked up, their weapons glinting in the frosty early morning sunlight. While winter, the day looked to be clear and bright, and the faint puffs of condensation from their breath wafting out of their helmets gave them the look of infernal beasts. A not unfitting appearance.

They weren't here for the Vampire and his territory. They were instead a raiding force, scouting ahead of their main forces, looking for signs of the abyss, to once more plot a Reckoning. To find out if, indeed, the Wicked Ones needed to be Reckoned with. Yet scouting forward they decided that a certain patch of land, the abandoned ruins of a barely settled village, would make a good staging point. But this village was within the Vampire Lord's domain, and no such stake to his kingdom would he allow. 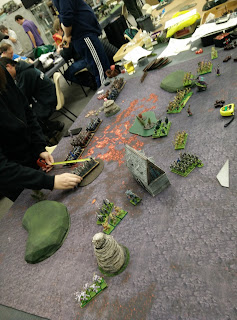 The reach of the abyss grew longer and harsher as the aura of the blessed touch faded from the town of Angelfall over the centuries. Once more it was the dwarves that marched, bringing their obsidian creations with them to bring wrack and ruin to all in their path. Still sore from his previous encounter with the twisted reflections of the proud dwarf nations, the Vampire Lord leapt at the opportunity to bring them low. A different general lead this horde, but the destruction of his troops would be no less sweet. 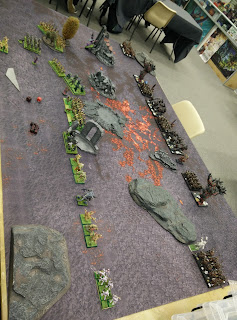