Whenever the topic of balance comes up in Facebook's Kings of War Fanatics group, the general consensus is that Kings of War is actually fairly well balanced. No one really claims it is perfectly balanced, and very few people claim that it is broken.

But what do people mean by this? Everyone probably has slightly different definitions, but for me a system is balanced when the power curve relative to the points costs is fairly consistent. That is, if you plot power against points, you will get the units clustered fairly close to a line. This line might be a straight line, or a curve, or a wiggle, but the units tend to stick fairly close to it.

Now, what is broken? A broken, or overpowered, unit would be one that sits too high out off the power curve. What that threshold is depends on how tightly everything else clusters around the line. Broken units are what a stats nerd might call an 'outlier'. Conversely, an underpowered unit sits too far below the line. They might also be called overcosted. Again, a type of outlier.

Let us assume the power curve is a straight line, dotted in orange below. The units in the game are represented by the blue ovals. Now I am putting them as ovals on this graph because there is uncertainty around absolute powers. Some things are good only in certain situations; in certain metas, against certain list builds, with certain amounts or terrain, clocks or not, etc. So I put them in as ovals to show they are 'kind of' around that power. 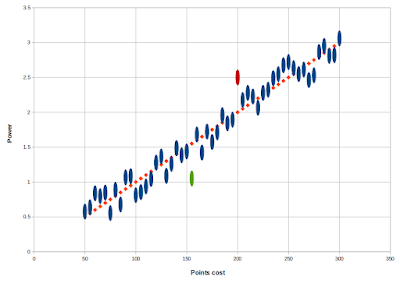 NB: Data is synthesised and simplified for illustrative purposes. It does not reflect any specific actual units.

Looking at this we can see that there is a 200 point unit sitting well above line, marked in red. The power of that unit is too good for what it costs. My interpretation of what the rules committee seems to be doing with their tournament pack tweaks is looking at these overpowered units and bringing them back towards the line. They have two choices to do that, either reduce their power, which will pull them down towards the line, or increase their cost, which would push them right towards the line. The former option ensures no existing players' lists have to be re-written, and seems to be their preference. So we see units that are broken being pulled down into the acceptable band. A colloquialism for this is "being nerfed". Again, some people might have a different definition of nerf, such as reducing the power back down well below the line, but for me it just means to reduce the power to some degree.

On the other side of the line, the green unit is fairly underpowered. To 'fix' it you could do the opposite of the fix for the overpowered unit: reduce the cost or increase the power. And again the rule committee seems to be favouring power changes rather than points costs, presumably for the same reasons as outlined above. Colloquially known as "getting a buff".

When a nerfing happens, however, there are a subset of commentators who insist that nothing should have been done because the next thing down will then become the best and it will need to be brought back in line, and so on. However, if you look at the graph above you'll note it is not about pulling things exactly to the line, or below the line, it is about bringing them back into the same band as the rest of the units. As this is still a subjective measure of 'power', you can only give an approximation of where you want it to be with the nerf or buff. It is quite conceivable that eventually all units could come within the band after some tweaking.

But then comes the fun bit. New scenarios, spells and items. New units or lists. Each of these introduces a bit of a kick to the chart, scattering the ovals a little and dropping new ones into the chart. With sufficient playtesting you could probably ensure most of the ovals stayed within the band before the new things come out, including any new units or items you introduced on to the chart. But the true location might not be revealed until the new things hit the streets, and the full Kings of War community put their minds to milking it for all they can. Provided that community feeds their findings back through to the rules committee, however, any oval that did end up too far off the line can be tweaked in the next tournament pack, errata or rules update.

This is why I do not worry when the rules committee make changes. They appear to be doing it based off community feedback, and with the goal of keeping everything close together, not dropping anything out the bottom of the chart. I will admit I am not exactly personally tearing up the tournament scene or pushing the limits to see what ovals might be far off the line, but from what I can see the committee are doing a fine job keeping the chart tidy.