In the township of Angelfall the Book of the Grey is the bible and law book, encyclopaedia and instruction manual. The priests of the Grey are judges, police, spiritual leaders and guidance counsellors.

The Book describes the Greylands, the world just beyond death. While most religions focus on the afterlife, the Grey focuses on the transition world between life and death. Mortal souls travel across the Greylands as they make their way to the afterlife. It is from these Greylands that necromantic energy is drawn, and souls captured to become undead.

In Angelfall the townsfolk know of death and the Greylands, as all whole live there know the Book of the Grey from an early age. They also know of, but rarely speak of, the Keepers of the Dead.

When a mortal in Angelfall dies, they are wrapped in ceremonial grey robes and presented to the church. There, they are taken away into the catacombs beneath the castle or the various graveyards around Angelfall to be interred as per their station. The priests of the Grey hand the bodies to the Keepers of the Dead, the ghouls, whose duty it is to lay the bodies to rest. Good people who committed no crimes are allowed to be eaten by the Keepers, ensuring their mortal bodies cannot be brought back as zombies. A precious gift in the unquiet grounds of Angelfall.

Like most ghouls, eating the dead does unnatural things to their bodies and minds. However, under the watchful gazes of the priests they stay loyal to Angelfall and its people, only unleashing their vicious base instincts on enemies of the township.

Being from cold and dark places, their skin is perpetually a pale purple colour from lack of sunlight and poor circulation. Their eyes, too, have adapted to the darkness and are giant pools of black, their pupils dilating almost as large as the eyeballs themselves.

I had found a large amount of my favourite ghouls, the Paul Muller sculpts from GW in the 1990s, second hand for pretty cheap. They were at a local games convention, Cancon, a few years back, and some more again last year. Unfortunately they all mostly had their tabs chopped off and were glued directly to their bases. The glue was pretty malleable, possibly araldite? They came off pretty easily. 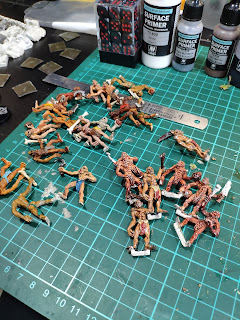 Then it was time to lay them out and see how many of each I had. For a Kings of War horde it was, at the time I was prepping this in early 2019, a minimum of 21 models for a horde. 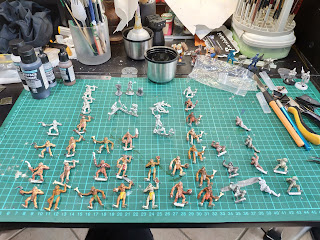 I had been experimenting with my stripping method, which was an Aldi deck cleaning chemical in an Aldi sonic cleaner. 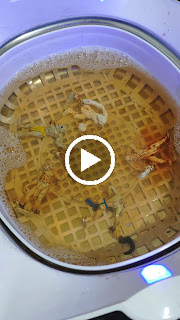 It seems to work fairly well in general, sometimes needing a few runs through (at 10 minutes each) with a soak in between. 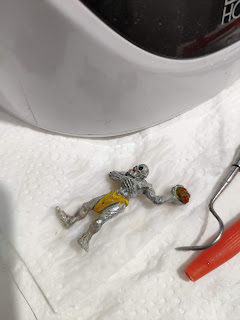 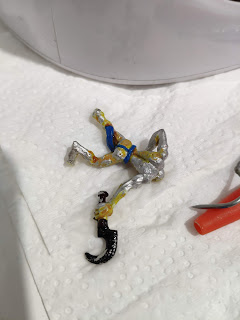 With some earlier lead minis I was sometimes getting some bad corrosion if I went too hard (I stuffed some Terminators doing this), but for these 'modern' white metal models it was not much of a problem. I think the occasional impurity, or two different metals touching, could sometimes cause electrolysis or something, but not enough to worry about as long as I used the plastic basket for them and did not do too many at a time. 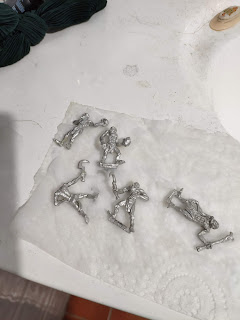 Coming up fairly well, although note some of those earlier ghouls on the right aren't as clean a colour afterwards as the white metal ones. 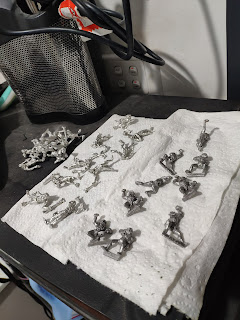 A test layout on the horde sized unit base, as I wanted to do my second ever multibase. A few bits of graveyard scenery from Reaper help set the scene and tie into my lore (and classic ghoul lore, too). 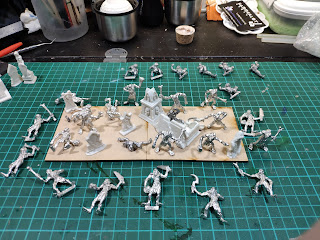 So at this point I decided pinning everyone's feet was going to be necessary. Even with an electric screwdriver and bit chuck, I was taking ages to get even small holes drilled into the heels of the damn hard white metal. Maybe I need a sharper bit? Who knows. I gave up after about this many. I'll just try not to knock them much after I'm done. 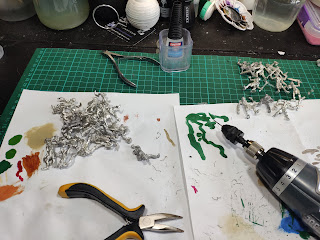 Everything I had read about multibasing lead me to want to do the models separately, and the base painting and texturing, and then put the models on the base. However, without tabs, I had nothing to hold the miniatures by while painting them. And buggered if I was going to put them on something to paint them, and then unglue that and reglue on the multibase. So straight onto the multibase was going to be the way for this lot.

Spray paint the MDF base (top and bottom) to make sure it will not warp from ambient humidity, or later layers of PVA. From talking to some of the other Kings of War guys in Canberra they have not got warping even without sealing at all, but lots of UK and USA people have complained about MDF warping, so better safe than sorry? I want it green anyway so patchy flocking will not show up to badly. Of course, I then went and airbrushed over everything later so that was a bit pointless. 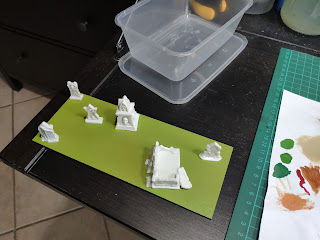 Let us glue these corpse eaters down! 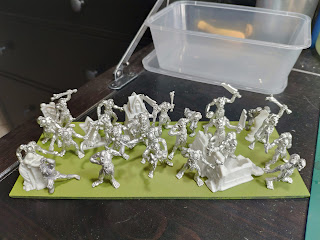 A few gaps if I want to increase the model count at a later date, but not exactly a sparse looking base. 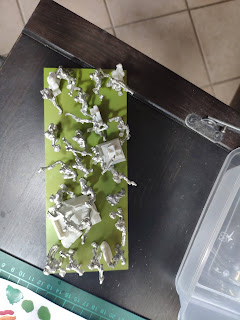 Airbrush and Vallejo white primer. I love this stuff, especially their light grey for general use. Great texture and goes on so well. It is not actually that good at bonding to surfaces though, if you rub it hard accidentally with the edge of something you can often get it flaking up. But it gives good coverage and won't clog detail.

Using the same basic painting method I used on my individually based ghouls - keeping it quick and easy. Purple Army Painter wash on the skin. 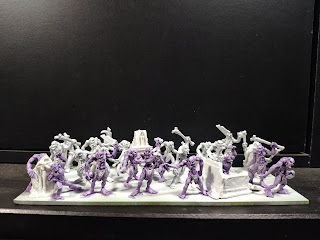 Dry brush white over it once dry. Give the wash a long time to dry, trying to dry brush over not quite dry wash is a recipe for disaster. On my individually based models there was a pale purple dry brush in between these steps, but it turns out it adds very little effect for a considerable increase in effort, so was dropped for these ones. 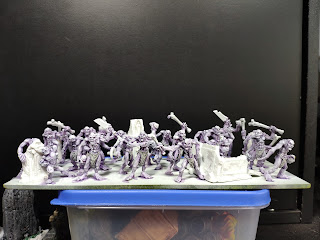 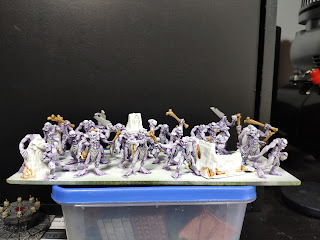 Stone parts got a black wash over the white for a bit of a dirty marble effect. Patches of the strong tone splattered around too for a bit of grime. Then a dry brush with Secret Weapon Weathered Wood (a very light grey). Loin cloths got a grey with a black wash (they just scavenge from the bodies they eat, so it will always be grey), and metals got a gun metal colour, black wash, dry brush with a lighter metal (GW ironbreaker in this case). Hair was Warcolours brown transparent paint over the white basecoat, which is pretty much like a contrast paint or heavy wash in effect. Fingernails got picked out in Warcolours ochre 3. Tongues got a bright Warcolours Red 3.

The eyes I wanted to look like deep dark pools, so I had a crack at using Black 2.0 that Crooksie let me decant some of from his Kickstarter purchase. It turns to a dry crumble in an instant off the palette, so I dropped a bit of drying retarder medium on it to give me all of 3 seconds working time with it. I think it went....ok? Not much different to just black paint, certainly not noticeable at tabletop distances (which is where I am aiming my units for). 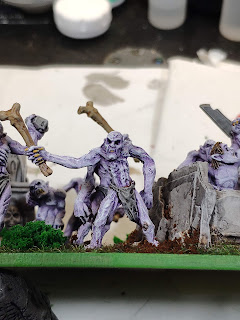 Jump into manual mode on the phone camera and try and give it a spooky nighttime feel.

And then add the static grass with a static grass applicator, and patches of dirt using coffee grinds. Also a patch of clump foliage here and there to give the graveyard a bit of a disused look. Finish the lot off with Army Painted anti-shine matte varnish (through the airbrush again - it is 37 degrees outside and Canberra has had apocalyptic levels of smoke pollution from the Australian Bushfires so I do not want to be outside).

I have played this Ghoul horde in three games of Kings of War now, and they are certainly....a unit. A decent bit of range on their charge, an awful lot of attacks (hitting on 4s, which is nice for cheap units), and nerve enough to shake off a smaller attack. They struggle to do too much if facing armoured opponents, or being hindered. I will need a few more games I think to get a better feel for how best to use them. 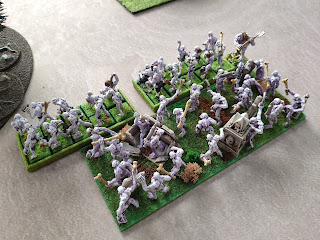 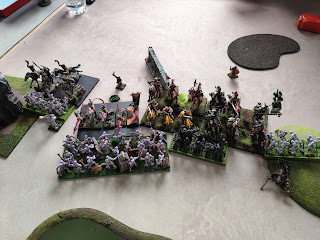