AAAAARRRRGGGHHHHH. I JUST FOUND THIS POST FROM WAY BACK IN 2020 THAT WAS STUCK IN DRAFT AND NEVER ACTUALLY PUBLISHED HERE! WELL, TODAY YOU GET IT! (....and the reason I opened up my blog was because I was about to blog about some of my other stuff, including further work on this project....)

Hi all! Salem here from The Vampire's War Diaries. A Greater Daemon Challenge by the Scale Creep crew! Just the motivation I needed to get one of my old greater daemons painted up, some of which I had made a half-hearted start on back in the early 1990s, many of which were "re-collectings" from recent years to replace ones I had as a kid, and others still were just random purchases because I loved the models. So politely shoving my way in as a fake creeper, I signed myself up to the challenge. But how to choose? Which model will get the love this month? I think this calls for a ..... montage!

I searched through all the candidates, and even started cleaning up the Balrog, but none of it was really inspiring me. It was not until I was putting the Balrog away, dispirited, that Nagash caught my eye; glaring at me from the "to be continued" shelf in my cabinet where I had left him after doing the assembly and greenstuff work. A quick 3D print of a base appropriate for Kings of War, some sandy filler for base coverage, and a few resin tombstone pieces I picked up in an old Hammerlot Games Kickstarter and had yet to make use of, and I started to get genuinely excited. 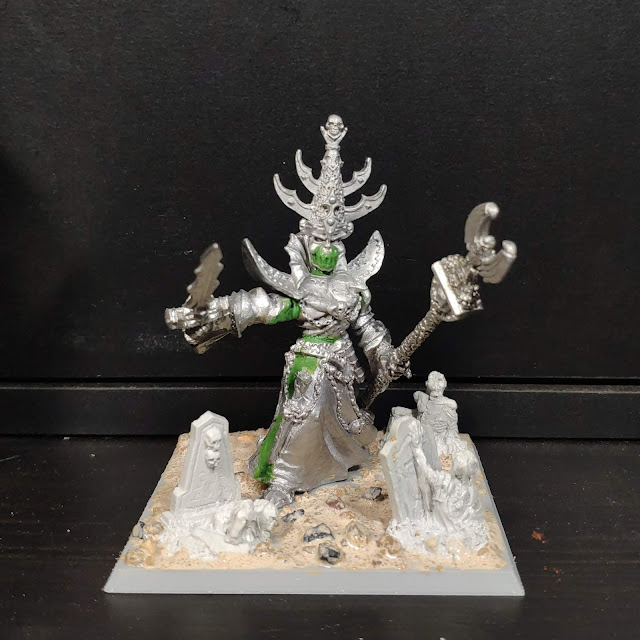 Now while technically the old Nagash model is not a greater daemon, he is well known as a daemon in the sack, and also pretty much fulfilled that same "big bad" slot in 4th edition undead armies that the greater daemons filled. Besides, who would NOT want to see him painted? While assembling him however long ago it was, I wanted some dynamism in the pose, and to try and make him look a little less goofy. So his sword arm got a bit like it is slashing out, I added a short neck on the poor guy, and covered his cheesy teeth with what I hoped was some sort of horror looking skin mouth thing.... ? The plan being to paint him as skin covered, not skeletal. More like the army book art, and less like the box cover photo.

Of course, back in the 4th edition times, I had really wanted to field a Nagash, but did not exactly have the kind of money to throw around on the official model. What I did field was a Heartbreaker miniatures Undead Lord (now available from Ral Partha Europe) that I had converted to have the Staff and Book of Nagash. The staff being a lance off the original Juggernaut of Khorne saddlebag, and the book was some tiny bits of paper folded inside a tiny piece of cardboard for the cover. This guy I still lovingly use as a Liche in Kings of War to this day, despite it being a rather basic, and tired, paint job. 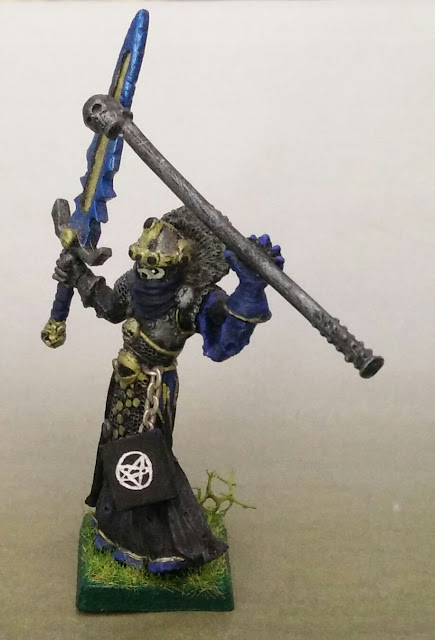 Slapping down the purple base coat on the large flat areas filled me with despair. It was going on blotchy and patchy. I tried more thinning, and less thinning, and it just kept looking ... meh ... even after several coats. I gritted my teeth and hoped to hide all the horror in the layering phases. 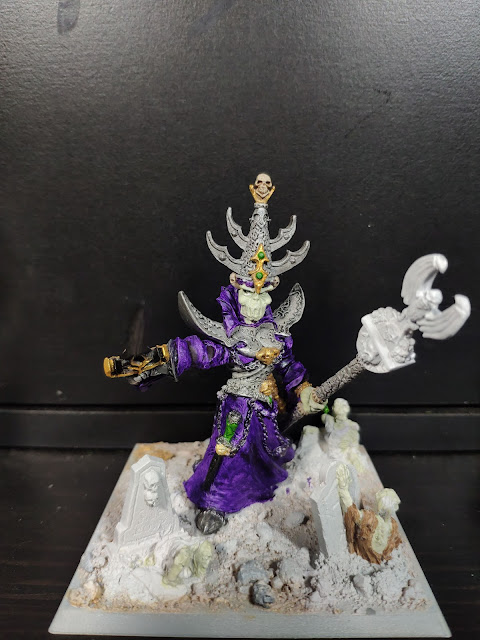 Blocking in the other base colours seemed to calm down the purple horror a bit, so my enthusiasm started to come back. 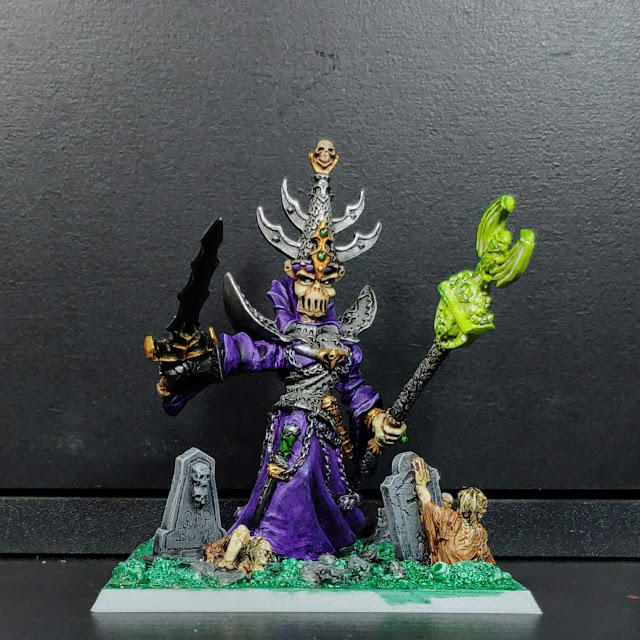 I told myself I was giving the zombies on the base a very basic paint job so as not to detract from the centrepiece - extras on the movie set, background cast, basic scenery, or what have you. The reality is they just frustrated me and I was running out of time and mojo.

Nagash's sword and dagger I wanted to look like shards of obsidian, so they were done in a basic black with just hints of white highlights and some white streaks on the sword. Of course with the angles I was taking the photos from all you see is a silhouette. Yay. 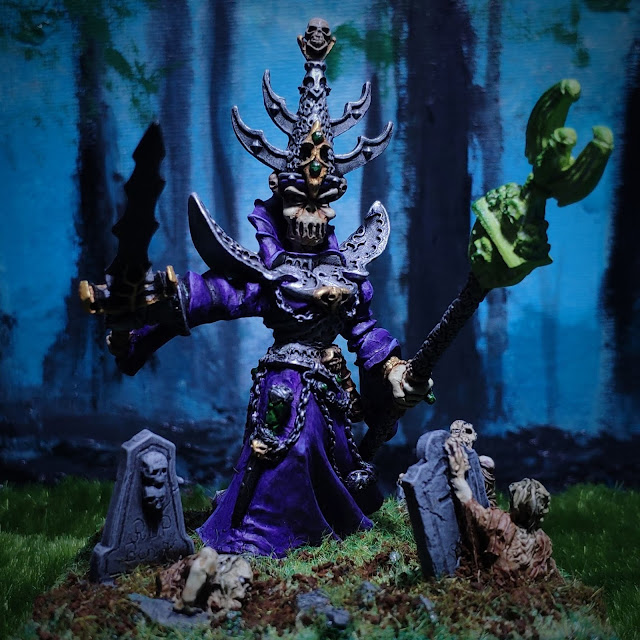 Once I'd finished the basing I put him in front of the backdrop my partner had painted for me, and started playing with lamps and manual camera settings. I was trying to go for the impression of a moonlit stroll through a graveyard. I had thoughts of trying some airbrush OSL off the staff on to the zombie beneath it, but chickened out (and my airbrush playing up and sputtering was not helping build confidence). 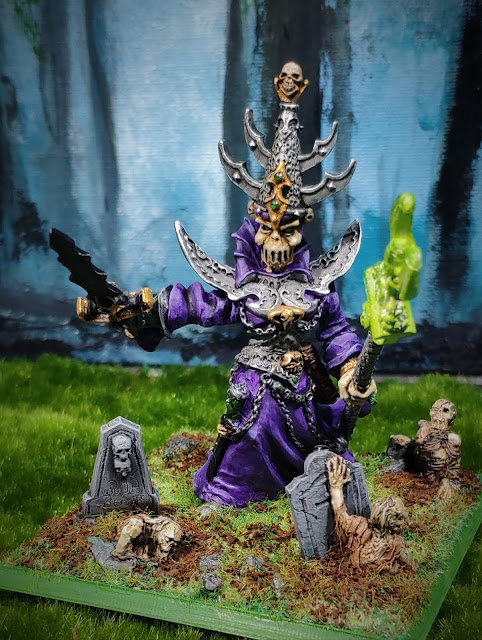 So there we go. Another childhood wish list item ticked off! #justiceforgary